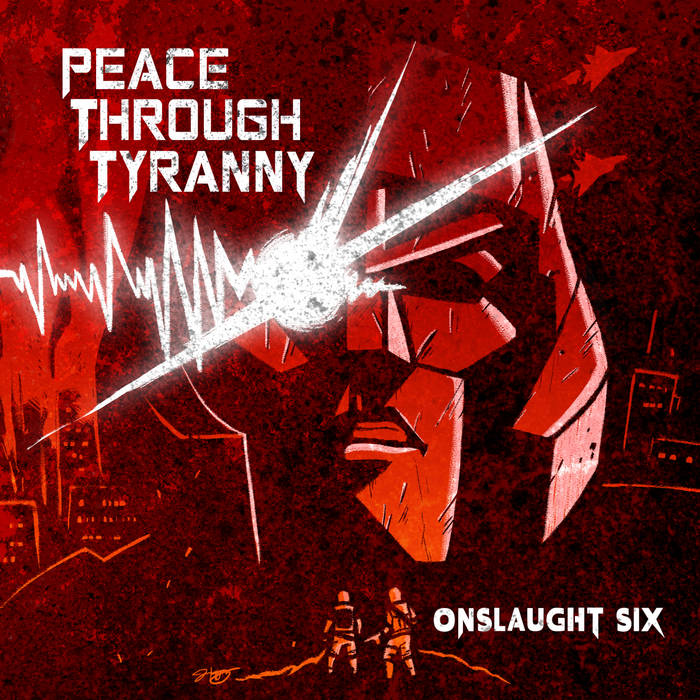 Waspinator1998 Peace Through Tyranny shows an obvious lyrical and musical evolution from First Blood, yet still retains much of the same tone with lyrics primarily centering around giant robots, ancient deities, and monsters from beneath the waves. An essential part of any Onslaught Six collection. Favorite track: Lord Poseidon.

A. Keswick Master Of Puppets meets Transformers: The Movie. If this had been released in 1984, it would today be the world's greatest cult classic nerd thrash metal album. Solid jams about war and injustice, and also robots, with some great appearances by guest musicians including Stemage of Metroid Metal fame. Favorite track: WW3.

Originally, Peace Through Tyranny was supposed to be my first album ever released, in 2007. Some of the songs were written, and remain mostly unchanged, over five years later.

Now, after months of work, and with the help of lots of collaborators, I've made what I consider the greatest album I've ever done; a true expression of what Onslaught Six as a musical entity was always intended to be. When it hits, it hits hard, shredding faster and heavier than ever before. 12 tracks of mean machine goodness plus a whopping four bonus tracks (two originals and two covers), instrumental versions, demos dating back to 2008, desktop & phone wallpapers and more!

This album deals with all the injustices of this world, and the many fictional worlds that surround it. If it pissed me off or inspired me in some way, it's here.

When the alien robot overlords show up, when you surrender to their iron will, remember one thing: Peace Through Tyranny.

Special Thanks:
Goddamned everybody