from λX: Enter The Machine by Onslaught Six 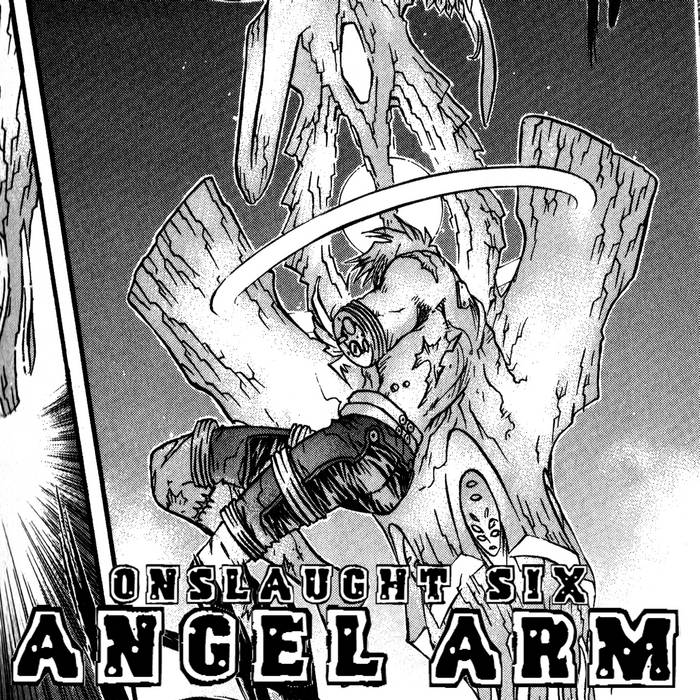 Angel Arm was a planned inclusion to λX almost from the beginning. As the album began to take shape, however, it no longer fit, narratively or thematically. Though it did fit when it came to a musical aesthetic viewpoint, I figured it wouldn't be enough to keep it in the album on its own. (We got Deicide instead, so maybe it's for the best.)

Angel Arm started years ago when I decided to write a song about the manga & anime series Trigun. The original draft was titled "Under The Sky So Blue," after the 26th episode of the anime. I kept the core premise and rewrote it a while later, and bits of that draft ended up in this final version. I decided on the title later, after the weapon that Vash The Stampede's arm turns into.

It doesn't quite follow any specific Trigun story, I kind of just took the characters and themes and used them for my own purposes, but whatever! It's awesome.

I tried repeatedly to record the vocals in this one--a good lot of the takes weren't as good as my first one. It's not perfect, but you know what? Fuck it. It is what it is.

And so I wandered for an eon in this endless desert
Crying out into the sky
Now that I have found you, deep within this oasis
You and I...One of us must die!

You betrayed me, Brother
Waning of the moon
Screaming to the skies
I'll have my vengeance soon!

Crawling deep within the bowels of your fortress
Charging fast as I break through
Crippling every one of your minions and your peons
It's all worth it to get to you...
Oh!

You betrayed me, Brother!
Waxing of the moon
Screaming to the skies
I'll have my vengeance soon!

Knives:
[You don't understand anything anymore, Vash.
You've lost your sense of self.
Allowed yourself to become a slave to your emotions.
No better than those you wish to save.

And now, as you yourself said
There is but one outcome.
You and I.
One of us must die.]

It doesn't have to be this way!
[You are a fool!]
We could be a force for love and peace!
[Those ideals died along with *her!*]
If only for once...you would lay down your sword!
[NEVER!]
...you would truly understand!

We charred this planet
[That we did]
We scarred its moons
[And all for what?]
Under this azure sky
[The sky...]
I'll have my vengeance soon...