from The John Carpenter EP II by Onslaught Six 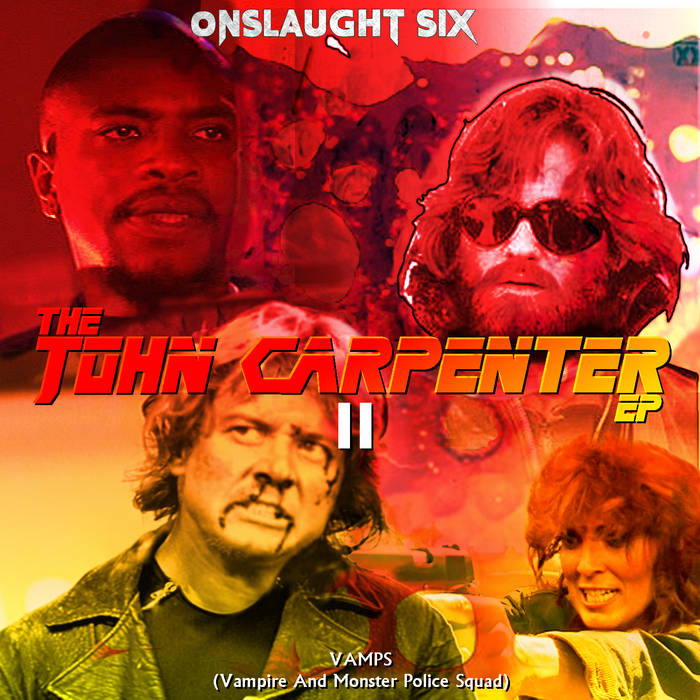 A man stands above the crippled body of a hideous creature. Snarling teeth peek out from a jagged maw, horns above its curled forehead, a secondary pair of glowing eyes outside the first. The charred remains of a pair of bat-like wings adorn its shoulders, and peeking underneath its tattered jeans lay a pair of goat-like legs. The entire corpse is also covered in seething blood--some belongs to it; some doesn't.

The man wipes off his bloodied mouth and gasps. This is RIGGS DEMOTT (RODDY PIPER). RIGGS wipes his hands on his leather jacket and walks over to a forgotten shotgun, holding it tenderly like an old friend. It's the only friend he's got now; the SEALS discharged him for disorderly conduct after he led a riot--a riot he only caused because he and his team were ordered to fire on civilians in New Vietnam. RIGGS wasn't about to do that. Fuck your political agenda; he joined up to protect the world, not to watch it burn. Now he's on the run. The only way to make money in this Godforsaken city is underground, in the seedy bars and underground cage fights. His hands are worn and calloused from so many battles, he doesn't even remember what they looked like before. He's just trying to survive...whatever that means.

RIGGS looks back at the broken corpse of the smashed beast. He doesn't know what the fuck this is or where it came from. It used to be in the shape of a man (OX BAKER); a man he won against in the cage. When RIGGS last saw him, he seemed seven feet tall and had a beard longer than most; a hulking mass of muscle and sinew. But he was no match for RIGGS in the cage. It was only after his payment and when he left that the man became monster; his wings ripping from his back, demonic legs sprouting from his kneecaps. RIGGS had fought hard and well, and once again he was victorious. But this wasn't anything like the fight clubs; this was different.

This time, he wasn't getting paid.

RIGGS pulls a canister of lighter fluid from along the street and douses the corpse. Then he lights a cigarette, and tosses the match onto the charred beast. The creature lets out a howling scream as it burns--clearly not dead yet, but the cleansing fire will change all of that.

As RIGGS walks down the street, he is approached by two men in urban camoflague fatigues. "You there. You Riggs?"

"Vance wants to see you."

RIGGS puffs on his cig. "Vance, huh? You tell Vance if he wants to see me, he can show up himself."

RIGGS feels the barrel of a gun pointed at his back.